Potential sites on the seabed are often first noted by fishermen. Pots and nets can become snagged on archaeology on the seabed – termed ‘net snags’. Information about such snags is often passed on verbally from vessel to vessel. This potentially means that there is a wealth of archaeological material on the seabed which is well evidenced by fishing vessels but which is not recorded elsewhere. Schemes such as the FIPAD provide a recognised framework through which finds on the seabed can be reported and recorded.

During the operation of the FIPAD Pilot Graham Doswell reported a potential site lying off Eastbourne which is believed to hold propellers. Little else is currently known about this site.

Information reported through the FIPAD is uploaded onto national databases which act as a point of reference for all archaeological projects, planning consents and offshore developments with regards to heritage. In this instance, this potential site will be reported to the National Record of the Historic Environment maintained by English Heritage (previously the National Monuments Record) and the Historic Environment Record for East Sussex. This discovery will also be reported to the Local Government Archaeology Officer and to the local Finds Liaison Officer.

This cannonball was found offshore and appears to be suffering some degradation caused by the damaging effects of submersion and drying on iron finds. Round shot such as these were in use from the medieval period until the 19th century. Early examples were made of stone with iron becoming dominant from the 17th century onwards. This type of ammunition consists simply of a heavy round ball and receives its momentum from gunpowder placed behind it in the barrel of the cannon. They show little variation in construction over time but they do change weight and size reflecting changes in the design of the cannon used to fire them. 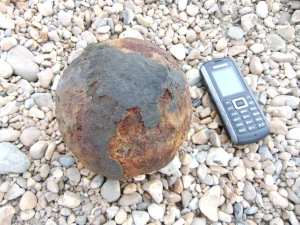 This example is described as potentially having come from the vicinity of the wreck of the Resolution, which sank in Norman’s Bay during the Great Storm of 1703. Cannonballs are common finds in the south coast region which has played host to an abundance of battles, training shots and shipwrecks during the age of sail accounting for their presence on the seafloor. A concentration of them from one area may indicate the site of a naval battle, or (and especially if maritime material is recovered alongside them) the site of a shipwreck. This find was reported through the Protocol and is retained in personal possession.

This wooden timber was discovered offshore. When it was discovered in the 1980’s it was around 15 feet in length. The finder, Graham Doswell, contacted an archaeologist who cleaned the find and reduced it to its current length. 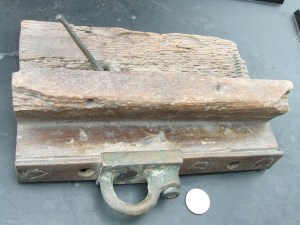 Images of the find were shown to Wessex Archaeology’s Coastal and Marine Team who agreed that the find may be part of the gunwale of a vessel with the ‘loop’ shown above providing a line guide for ropes as part of the rigging – this is known as a fairlead. The construction of the piece suggests that the fairlead could be adjusted to move to the left or right of its current position which would allow the ropes to be tensioned or repositioned. The section of wood standing proud in the centre of the item might be a stringer providing structural support for the gunwale and allowing the attachment of further framing. A screw noted on the top right of the image above appears to have an even thread suggesting that it was machine manufactured. This type of machinery didn’t become widespread until the late 18th century and so this find is likely to date to the late 18th or 19th century.

Clay tobacco pipes like this one were in use from approximately 1600 onwards. They show a distinct typology in the construction of their bowls, which can allow relatively accurate dating.

Images of this find were shown to Lorraine Mepham, finds specialist at Wessex Archaeology. This pipe is decorated with fluted patterns and has a spurred bowl. This example, Lorraine tells us, is likely to have been made in a mould. A faint seam, visible around the bowl of the pipe and extending down over the spur, suggests that this was manufactured in the 19th century. By this time, this type of pipe was being mass produced and manufacturing processes no longer allowed for the quality of finish seen on earlier examples, which would have seen the seam smoothed off.

This find is retained in personal possession and is described as having been found off 4 miles off Eastbourne by a vessel using pots or creels. It was reported through FIPAD by the finders.

Sussex Inshore Fisheries Conservation Authority staff reported these artefacts.  It is unknown where they were originally found but they are on display in the mess room of Chichester Harbour Conservancy. 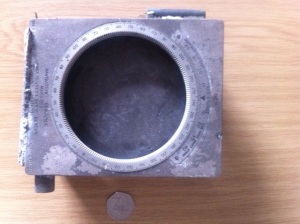 The finds are thought to have come from an aircraft and potentially date to the Second World War. The find shown on the left above is a warning panel bearing the message: ‘WARNING DO NOT SWITCH OFF THE BATTERYCIRCUIT WHEN THE ENGINE IS RUNNING’. The find on the right is the dial and case of a lap compass and bears the inscription ‘Navigation Computer Mark IIIC’. It was made by Henry Hugh & Son, a London based firm who developed the first compasses for use in aeroplanes during WWI. It is likely that both of these finds came from an aircraft. During the Second World War many thousands of aircraft flew over the south coast to attack or defend cities, industry and military targets in Britain.

This find was discovered by the Royal Exile whilst fishing with pots on 15th December 1982. It is retained in private possession with the present Shoreham FIPAD contact. This exceptional find aptly demonstrates the value of material that can be reported through the FIPAD. Finds like these, without the safety-net and framework that a protocol provides, may go unrecorded.

This is an 18th century carronade which was known by sailors as a “Smasher”, presumably a reference to its destructive capabilities at short-range. The carronade was designed for close quarter engagements. Mounted on the side of a vessel it had the potential to fire a range of ammunition including cannonballs, barshot, double-headed chain shot, grape shot and canister shot. The short length of the breech of the gun compromised the range, but for close combat it was a practical and effective weapon.

This bone was correctly identified by the finders as a mammoth bone. Lorrain Higbee, zooarchaeologist for Wessex Archaeology confirmed this identification. This bone is the proximal end of the femur or upper rear limb bone. Proximal refers to the end in closest proximity to the core of the body (antonym: distal) and this bone would originally have had a ball joint articulating to the pelvis of the animal. This example has been damaged during its time underwater and shows characteristic rounded edges caused by water action.